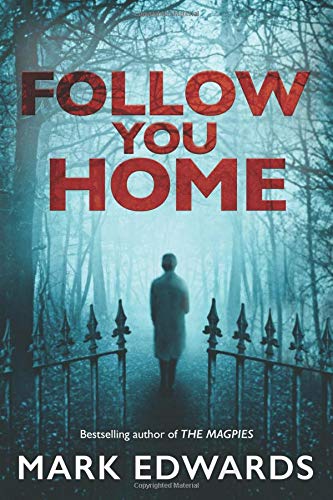 It was supposed to be the trip of a lifetime, a final adventure before settling down.

After a perfect start, Daniel and Laura’s travels end abruptly when they are thrown off a night train in the middle of nowhere. To find their way back to civilisation, they must hike along the tracks through a forest…a haunting journey that ends in unimaginable terror.

Back in London, Daniel and Laura vow never to talk about what they saw that night. But as they try to fit back into their old lives, it becomes clear that their nightmare is just beginning…

My goal in 2019 is to read better books, even if that means reading fewer books. I picked up this one by Mark Edwards because I know he’s a super popular author and it had been sat on my Kindle for months. I had expected better things from this one, but I still semi-enjoyed it and I would definitely be willing to read another book by Edwards.

First of all, I can’t fault the writing in this one. It’s in-depth and descriptive, without getting complex or airy, and I found the conversations between characters to be believable. Having clunky, fiction world conversations is a big no for me and always makes me dislike a book.

I also enjoyed how well we get to know the characters in this one. I recently read Snowblind which had way too much of a backstory for every character and I felt overwhelmed by the amount of information I was expected to remember. I’ve also read other books where there is a metre long pole between you and the characters you’re supposed to get to know and relate to. Edwards hit the nail on the head in this book, I actually enjoyed getting to know Daniel and Laura throughout and was interested in their well-being.

Another thing that ticked the box for me was just how gritty and dark this story is. I’m all about a book that makes me feel uncomfortable and icky, none of that cosy stuff for me!

Now what I didn’t love so much was maybe the most important thing… the story. To begin with, I found it very interesting, trying to find out what had happened in that house in Romania. But I personally think it took too long to get to the reveal. Don’t get me wrong, there was definitely a lot of tension building but there wasn’t a good ratio of small reveals to tension building. Instead of there being something to get excited about little but often it was a continuous build-build-build and ended with only a medium-sized bang.

After we do get to find out what terrible thing happened to break up their relationship, I found the rest of the story a bit too convoluted and over the top. I stopped being able to relate to it and that’s where my interest began to wane.

It did take me a good few days to get through this, mostly down to the fact I wasn’t overly enamoured with the story but it was enjoyable enough. Definitely recommended for gritty crime lovers who want to escape reality as it’s far from realistic!

17 Replies to “Review: Follow You Home by Mark Edwards @AmazonPub”