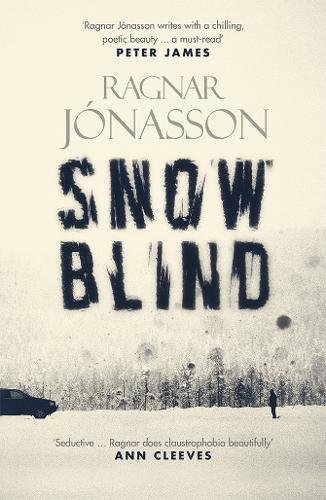 Siglufjörður: an idyllically quiet fishing village in Northern Iceland, where no one locks their doors – accessible only via a small mountain tunnel.

Ari Thór Arason: a rookie policeman on his first posting, far from his girlfriend in Reykjavik – with a past that he’s unable to leave behind.

When a young woman is found lying half-naked in the snow, bleeding and unconscious, and a highly esteemed, elderly writer falls to his death in the local theatre, Ari is dragged straight into the heart of a community where he can trust no one, and secrets and lies are a way of life.

This review is a long time coming, considering I read it during my trip to Norway. Luckily, it was such a memorable read that I was able to still write a pretty decent review… I hope.

I was extremely excited about this. It’s the beginning of a well-loved Nordic Noir series which I thought would be great for me, however, I found the whole book infuriating, for many, many reasons.

My main irritation with the book, and you will probably already know if you follow my rants on Instagram, was the main character, Ari Thor. I should have given an award in my 2018 reading wrap-up for “least favourite character” because Ari Thor would have definitely won it! What an absolute tosser! I am about to swim into spoiler territory here, but it’s not essential to the crime element of the story. The biggest thing that annoyed me about Ari Thor is that he blames the entire demise of his relationship with his girlfriend on her, even though he’s the one who moved hundreds of miles away without pre-warning her. There are so many times in the novel where I just wanted to hit him. He thinks about how “ungrateful” and “rude” his girlfriend is several times because she can’t take the time out of her busy schedule (of studying for university and working in a hospital) even though if it really mattered to him, he could go visit her instead. Then everything just gets worse when he goes and cheats on her with barely a second thought. UGH. So many reviewers are calling Ari Thor their book crush but for me, he was a self-centred, obnoxious arse… sounds like my worst nightmare in a man!

My next problem with this was simply that I found the story extremely dull and slow. It wasn’t until around 100 pages in when anything even remotely exciting happened. Before that, the story is just Ari Thor complaining about his girlfriend. After this first ‘event’ happens, the book then slows its pace again for another good chunk of pages before anything more “exciting” happens. Don’t get me wrong, I sometimes absolutely love a slow paced novel, but there was nothing atmospheric about this book, the slow parts were simply just boring and didn’t bring anything to the story.

At just under 300 pages, this isn’t a long novel (although it sure felt like it) so you’d think that Jonasson would want to do a quick but efficient job of introducing us to the characters. Instead, we get a mini-memoir of each one that drags on for way too long. It also felt like he only had a couple of ideas for how a characters life was lived as there were a couple of deja-vu moments with the backstory of one character to the next.

As for the conclusion, I was bored by it. Sometimes a bad book can bring it back with a whopper of an ending but this one couldn’t even provide that.

I sometimes think I must be excessively picky because I find lots of translated books really difficult to get on with. This one felt especially clunky. Does Quentin Blakes speak English himself? There were numerous grammatical and spelling errors. Not to mention an abundance of terribly structured sentences (almost as bad as that one)!

Overall, I found nothing about this novel enjoyable and I’m amazed I even finished it. There was no atmosphere, the main character was really unlikable and the other characters added very little to make up for the bad MC, and the story was boring. It’s safe to say that I will not be continuing with the rest of this series.