Halcyon is the answer for all Americans who want to escape, but paradise isn’t what it seems.

I’m so excited to be on the blog tour for Halcyon by Rio Youers today! Be warned, the book is very graphic and full of triggers!

I’ve always loved cults as a subject, but I rarely find any fictional books about them which is why I was so excited to receive this book from Titan Books! And I can say straight off that this book didn’t disappoint me.

I did a brief First Impression review for this book and all my initial excitement about the cult and the characters didn’t wane through the story. It was a really exciting book all the way through with plenty of creepy atmosphere, violence and thrills!

I genuinely loved the characters in this book, particularly Mother Moon. As a kind-of cult leader, she needed to be an interesting and captivating character but she went so much deeper than the standard enigmatic cult leader facade. Her character was immensely complex with a devastating backstory that helps make her one of the most interesting characters I’ve read about in a long time!

10-year-old Edith is another fantastic character. I feel like a lot of authors over or underestimate just how much a child knows, but with Edith’s terrible psychic night terrors, you’d expect her to be a little more clued up and I think Youers wrote the knowledge and sensibility of Edith really well.

Moving on to the story, and oh what a story it is! I didn’t read reviews before going in, so I wasn’t expecting a supernatural element to show it’s face right from the start and to begin with, I was nervous this wasn’t going to be the sort of book I had originally hoped it would be. I’m not always the biggest fan of supernatural books because they’re so easy to get wrong! Luckily, while this book is strongly focused around Edith’s physic powers it doesn’t completely take over the story and there is plenty of real life creepy going on!

I wasn’t at all disappointed by the cult aspect of the book. What I was expecting was something like a wacky cult where everyone believed in free sex, taking hallucinogenic drugs and were bloodthirsty… which I honestly wouldn’t have minded so much, but what I got was so much better! The Halcyon community is a far subtler creepy cult than I imagined but it worked so well in building tension. The communities pleasant lives made for a wonderful juxtaposition to the terrible secrets Halcyon was home to.

My opinion of the writing in this one is a little hit and miss. It mostly flowed really well, making it an easy book to lose yourself in, however, there were times when a singular line cropped up that put everything out of whack. The story would be moving along as normal and then all of a sudden you’re hit with “he liked the back of his balls licked” and you have to pause to recalibrate.

Overall, I absolutely loved this book! It wasn’t quite a spooky as I was hoping it would be but it was thrilling and gory which is almost just as good. I wasn’t expecting this one to come and be a beefy 500+ pages, so it’s definitely a book you have to dedicate a good chunk of your time to, but it’s well worth it! This one is wacky, unique and exciting, not to be missed by any violent thriller lover!

Thanks so much to Titan Books for sending me a copy of this book in exchange got an honest review! 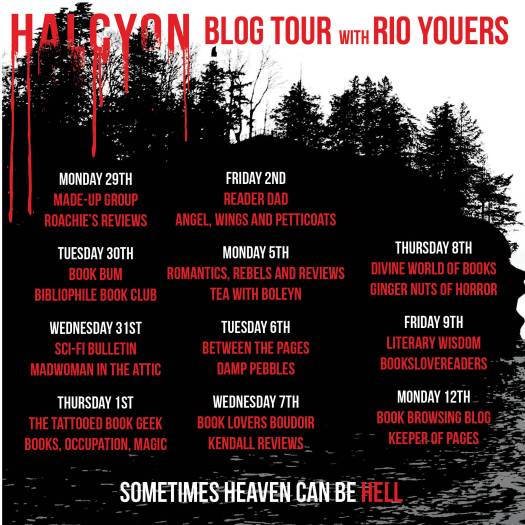