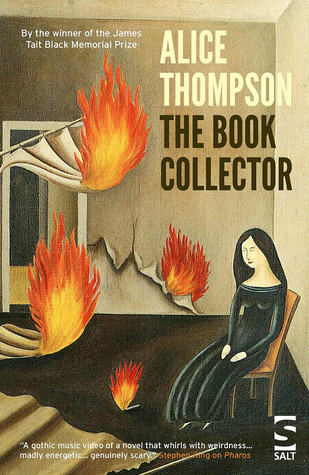 Violet is obsessed with the books of fairy tales her husband acquires, but her growing delusions see her confined in an asylum. As she recovers and is released a terrifying series of events is unleashed.

This was one of those books that I didn’t do much research into before buying it. I had seen it described as a classic and creepy gothic novel and that’s the only convincing I needed to get it. Unfortunately, this didn’t live up to my expectations. In the end, the cover was what I liked most about it.

Personally, I found this novel was lacking something. There’s no doubt that it has beautiful gothic imagery and themes, and that’s all well and good, but when the story doesn’t flow and leaves you wanting more, the imagery means nothing. To begin with, I was really enjoying this novel and the story of Alice, her mysterious husband, and the book of fairytales. I did feel the chapters were a little all over the place but that was all part of the parcel and I was excited to see where the story was going next.

Unfortunately, after a while, the story became a little bit lacklustre and I found my interest in the book slipping. The story was wide open, clear for you to see what was happening and what was going to happen next. Now I know with gothic novels it’s not about the twist and turns, it’s about the atmosphere, but even that wasn’t doing enough for me to fully enjoy this story. It just felt that with each chapter the story was skipping important parts of the development. In the end, I feel like I read a half-finished novel.

The scenery and characters were well developed but the story left me wanting more.

8 Replies to “Mini-review: The Book Collector by Alice Thompson”