If you’ve been following my blog or Instagram over these past few weeks you will have definitely seen me singing my praises for C. J Skuse’s books Sweetpea and In Bloom. They have both been 5 star reads for me this year and I’ve recommended them to everyone! My aggressive love for these books has actually inspired several of you lovely reading friends to buy Sweetpea recently (and I know this because I’ve been tagged loads on Instagram!!) – it’s been amazing to see loads of people get on board the Sweetpea train!

Today I’ve been super lucky and grabbed myself a Q&A with the genius mind behind these stories, C. J. Skuse. Keep reading to find out some of the behind the scenes of her hilarious, dark books!

What inspired you to write Sweetpea & In Bloom?

It story grew from a Serial Killer Barbie meme I saw online – it’s a series of pictures by photographer Mariel Clayton which captures Barbie in these assorted macabre frescos – if you Google ‘serial killer Barbie’ you’ll see the pix straight away.

Something about that strange mix of childhood and hideous death really spoke to me. Around the same time, I saw an advert on TV for the Jamie Dornan/Gillian Anderson series ‘The Fall’ which is about a female detective tracking a male serial killer and the advert saw her stalking him and I loved that – again, seeing a woman firmly in the driving seat.

There are so many novels and movies where women are the victims. Just once I wanted to see her as victor; as predator. I find angry women extremely interesting because it’s when we become angry that you see what we can really do. You see our truth laid absolutely bare.

For In Bloom the original idea was for the baby to make her an even more brutal killer than her but just as I was starting to write it, I saw a trailer for a movie called Prevenge which is about a woman whose unborn foetus is prompting her to kill. It was basically the same plot I had in mind. I was SO annoyed! Nevertheless, I had to go in a different direction and instead I made the baby her one reason to stop killing instead of her driving force – I think it’s even more sadistic as a result, especially with all its little threats to self-abort if she doesn’t comply with her demands.

Rhiannon is one of the driest and funniest characters I’ve read about in a long time! How did you come up with her character?

I don’t have to reach very far for her voice, put it that way! She’s pretty much me with constant PMS and a knife in her hand.

Female serial killers are pretty rare in comparison to their male counterparts. What was the thought process in writing books about one?

Well it was either write one or become one. And it’s a lot less admin to write one.

What sort of research did you do for your characters and the stories?

For the first story I read a lot of books and watched a lot of documentaries about male and female killers and imbued Rhiannon with some of the traits of real murderers and psychopaths. For In Bloom I spoke to some mothers and pregnant people, watched a few series of One Born Every Minute, talked to a couple of midwives, read a few preggo books cover to cover to get as close as I could to the experience of being pregnant without actually having to go through it myself. At one point I thought “This would actually be a lot easier if I just went through it myself” but then I went off that idea and read another book.

Do you have a Favourite? Sweetpea or In Bloom? If you can’t decide, do you have a favourite scene out of the two books?

Sweetpea will always be the book that got me my first film option so I think it will have to be that one. It will also always be the book that I was writing when my own mother was dying and I think it helped me mentally more than I will ever know. I needed to vent my anger in some way and Rhiannon came along exactly when I needed her. I love the scene in In Bloom where she gets told off at the barbecue. It basically sums up the novel – she has no idea how to be a mother because on some level she is still a child herself. A pretty vicious child, nevertheless.

Who are some authors who inspire you?

Sue Townsend, Chrissie Glazebrook, Melvin Burgess, Kevin Brooks, the Bronte sisters, I love all of them for showing me the way to go – just to be, even if you aren’t writing like anyone else it’s okay because someone somewhere will pick you up and enjoy what you write. They’re all pioneers, in my eyes. Over the entire span of my life I don’t think any writer has influenced me more than Victoria Wood though. I’ve adored her ever since I first saw her An Audience With… show on TV when I was about 7 years old – I’d watch it ad nauseum and repeat whole sections of it to my family which they loved. I still watch dinnerladies now and marvel at the precision of her scripts. French & Saunders, Carla Lane and Caroline Aherne are big heroes of mine too. I’d kill to be half as talented as any of those women. If my books are funny at all, it’s because of women like this who have lighted my way.

Are you in the process of writing a new book? (Please say you’re writing a Rhiannon book #3!!) If you are, can we have a sneak peek of what it’s going to be about?

I am indeed going to write Sweetpea #3, but not yet. I am itching to get going on it but I have other responsibilities to attend to first – such is life! You should see it around 2020, all being well. The story is in my head – I know what the first and last scenes will be – and I know the title already too. I really can’t wait to get cracking on it because it’s going to be so much fun to write (and read, hopefully). 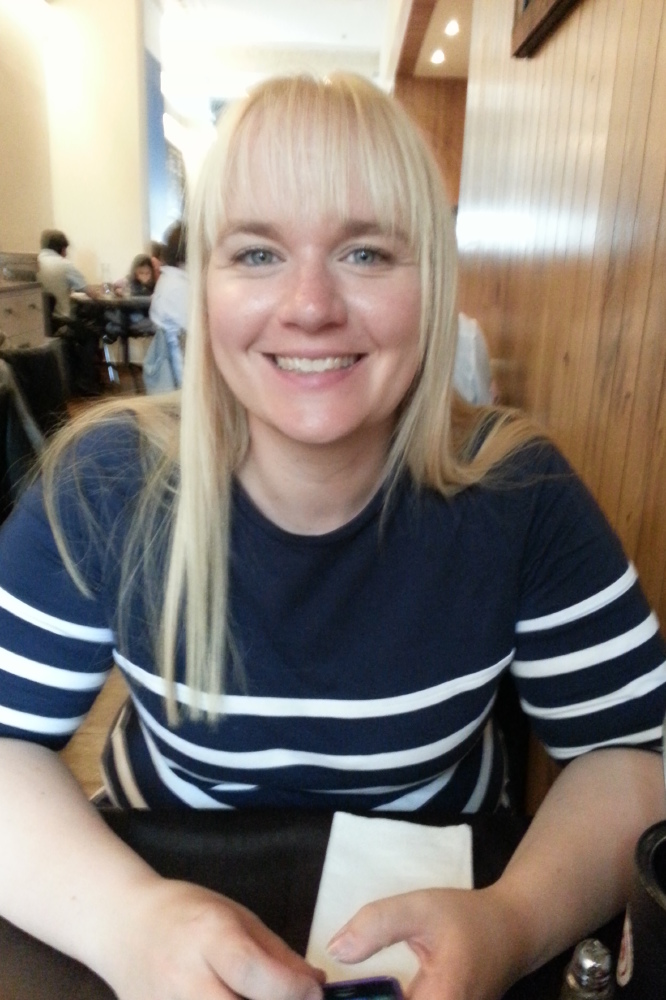 C.J. Skuse is the author of PRETTY BAD THINGS, ROCKOHOLIC, DEAD ROMANTIC (Chicken House) as well as MONSTER and THE DEVIANTS (Mira Ink), SWEETPEA and IN BLOOM (HQ/HarperCollins).

Born in 1980 in Weston-super-Mare, England, C.J. has First Class degrees in Creative Writing and Writing for Young People. Aside from writing novels, C.J. is a Senior Lecturer in Writing for Children on the M.A. at Bath Spa University.

C.J. loves Masterchef, Gummy Bears and Sylvanian Families. She hates carnivals, hard-boiled eggs and coughing. The movies Titanic, My Best Friend’s Wedding and Ruby Sparks were all probably based on her ideas – she just didn’t get to write them down in time.

Before she dies, C.J. would like to go to Japan, try clay-pigeon shooting and have Tom Hardy present her with the Academy Award for Best Original Screenplay.

So there we have it! Are we all as excited as I am about getting a book #3 in the future!!

It’s been so much fun learning a bit more of the thought process that went into these books, and as I have been for the past 2 months now, I urge you all to pick Sweetpea, it’s such an amazing book!