We’re back again this week with another one of these posts! There are a few different books this week, including a couple of nonfictions! 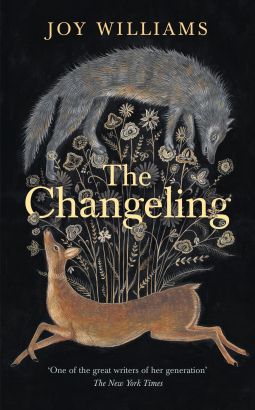 Synopsis: When we first meet Pearl – young in years but advanced in her drinking – she’s sitting at a hotel bar in Florida, throwing back gin and tonics. Cradled in the crook of her arm is her infant son. But the relief she feels at having fled her abusive husband, and the Northeastern island his family calls home, doesn’t last for long. Soon she’s being shepherded back.

The island, for Pearl, is a place of madness and pain, and her drinking might dull the latter but it spurs on the former. Through the lens of Pearl’s fragile consciousness, readers encounter the horror and triumph of both childhood and motherhood. 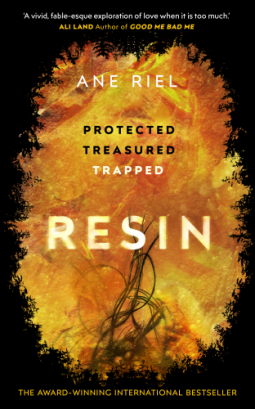 Synopsis: Liv died when she was just six years old. At least, that’s what the authorities think.

Her father knew he was the only one who could keep her safe in this world. So one evening he left the isolated house his little family called home, he pushed their boat out to sea and watched it ruin on the rocks. Then he walked the long way into town to report his only child missing.

This way, Liv would be safe. 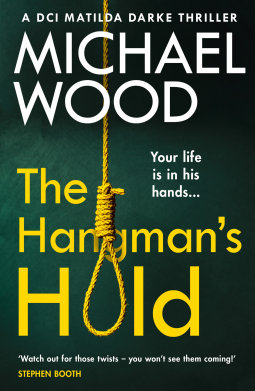 Synopsis: Your life is in his hands.

In the gripping new serial killer thriller from Michael Wood, Matilda Darke faces a vicious killer pursuing his own brand of lethal justice. Perfect for fans of Angela Marsons and Helen Fields.

There’s a killer in your house.
The Hangman waits in the darkness of your living room. As soon as you get home, he will kill you – hang you by the neck – and make you pay for all the crimes you have tried desperately to forget.

He knows your darkest secrets.
The police are running out of time. DCI Matilda Darke is facing her worst nightmare: a serial killer pursuing his own brand of lethal justice, whose campaign of violence is spreading fear throughout the city.

And he is closer than you think.
As the body count rises, Matilda is personally targeted and even her most trusted colleagues fall under suspicion. But can she keep those closest to her from harm? Or is it already too late? 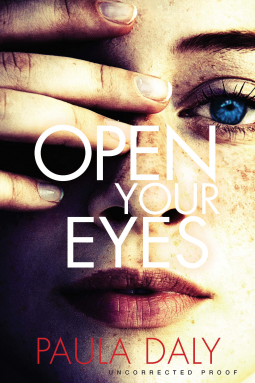 Synopsis: Haven’t we all wanted to pretend everything’s perfectly fine? Jane Campbell avoids confrontation at all costs. Given the choice, she’ll always let her husband, Leon—a bestselling thriller author—fight their battles. She’d prefer to focus on the good things in life: precious days with her two young children, a steady and loving marriage, their mischievously playful cat Bonita, and her fulfilling job as a creative writing teacher. In Jane’s eyes, life is altogether sweeter than any individual bump in the road.

But when Leon suffers a brutal attack in the driveway of their home, in front of their children, Jane has to finally face reality. Who would commit such a hateful offense in broad daylight? Leon has imagined his fair share of crime on the page, and now this unthinkable violence has landed on the Campbell family doorstep. With her husband in a coma, Jane must open her eyes to the problems in her life, as well as the secrets that have been kept from her. Although she might not like what shesees, if she’s committed to discovering who hurt her husband—and why—Jane needs to take matters into her own hands. 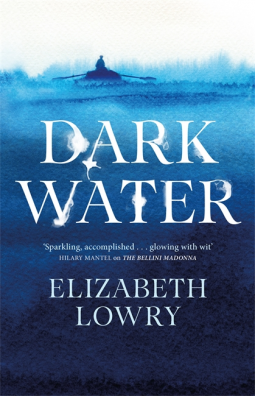 Synopsis: Aboard the USS Orbis as it embarks from Boston and surges south to round Cape Horn, Hiram Carver takes up his first position as ship’s doctor. Callow and anxious among the seasoned sailors, he struggles in this brutal floating world until he meets William Borden.

Borden. The Hero of the Providence. A legend among sailors, his presence hypnotizes Carver, even before he hears the man’s story. Years before, Borden saved several men from mutiny and led them in a dinghy across the Pacific to safety.

Every ship faces terror from the deep. What happens on the Orbis binds Carver and Borden together forever. When Carver recovers, and takes up a role at Boston’s Asylum for the Insane, he will meet Borden again – broken, starving, overwhelmed by the madness that has shadowed him ever since he sailed on the Providence.

Carver devotes himself to Borden’s cure, sure it depends on drawing out the truth about that terrible voyage. But though he raises up monsters, they will not rest. So Carver must return once more to the edge of the sea and confront the man – and the myth – that lie in dark water. 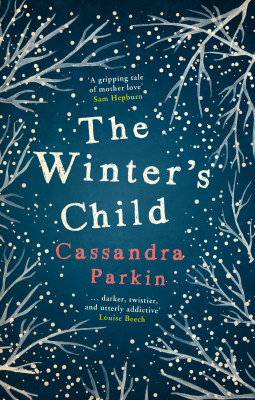 Synopsis: Five years ago, Susannah Harper’s son Joel went missing without trace. Bereft of her son and then of her husband John, Susannah tries to accept that she may never know for certain what has happened to her lost loved ones. She has rebuilt her life around a simple selfless mission: to help others who, like her, must learn to live without hope.

But then, on the last night of Hull Fair, a fortune-teller makes an eerie prediction. Susannah is told that this Christmas Eve, Joel will finally come back to her. 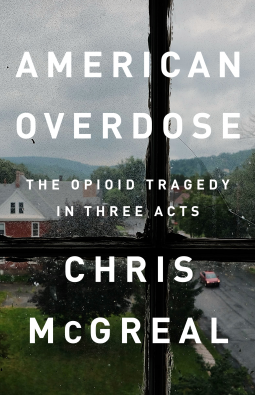 Synopsis: The opioid epidemic has been called “one of the greatest mistakes of modern medicine.” But calling it a mistake is a generous rewriting of history. Driven by greed, incompetence, and indifference, it was an utterly avoidable tragedy.

Chris McGreal reveals this in his deeply reported account, covering everyone from the law enforcement who struggled to get prosecutors to go after the doctors they called “drug dealers in white coats;” to miners who grew addicted to opioids while trying to ease the pain of their strenuous job; to physicians and scientists who tried to warn of an epidemic; to a teenage girl dragged into the heroin trade.

American Overdose also presents new evidence of Big Pharma’s domination of the healthcare system as it flooded the country with opioids. It exposes how the Food and Drug Administration and Congress were coopted into the drive to push painkillers–resulting ultimately in the rise and resurgence of heroin cartels in the American heartland.

McGreal tells the story, in terms both broad and intimate, of a population hit by a catastrophe they never saw coming. It was years in the making; and its ruinous consequences will stretch years into the future. 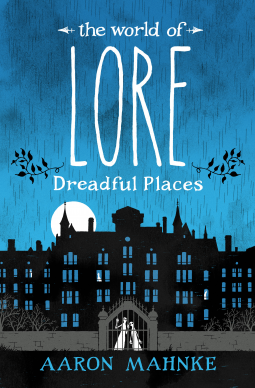 Synopsis:Captivating stories of the places where human evil has left a nefarious mark—featuring both rare and best-loved stories from the hit podcast Lore, now a streaming television series

Sometimes you walk into a room, a building, or even a town, and you feel it. Something seems off—an atmosphere that leaves you oddly unsettled, with a sense of lingering darkness. Join Aaron Mahnke, the host of the popular podcast Lore, as he explores some of these dreadful places and the history that haunts them.

Mahnke takes us to Colorado and the palatial Stanley Hotel, where wealthy guests enjoyed views of the Rocky Mountains at the turn of the twentieth century—and where, decades later, a restless author would awaken from a nightmare, inspired to write one of the most revered horror novels of all time. Mahnke also crosses land and sea to visit frightful sites—from New Orleans to Richmond, Virginia, to the brooding, ancient castles of England—each with its own echo of dark deeds, horrible tragedies, and shocking evil still resounding.

Filled with evocative illustrations, this eerie tour of lurid landmarks and doomed destinations is just the ticket to take armchair travelers with a taste for the macabre to places they never thought they’d visit in their wildest, scariest dreams. 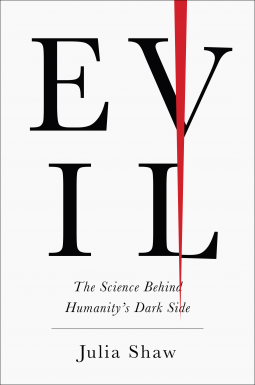 Synopsis:What is it about evil that we find so compelling? From our obsession with serial killers to violence in pop culture, we seem inescapably drawn to the stories of monstrous acts and the aberrant people who commit them.

But evil, Dr. Julia Shaw argues, is all relative, rooted in our minds and our unique cultures. What one may consider normal, like sex before marriage, eating meat, or being a banker, others find abhorrent. And if evil is only in the eye of the beholder, can it be said to exist at all?

In Evil, Shaw uses case studies and examples from academia and popular culture and anecdotes from everyday life to break down complex information and concepts like the neuroscience of evil, the psychology of bloodlust, and workplace misbehavior. This is a wide-ranging exploration into a fascinating, darkly compelling subject.

So that’s it for part 3! I overestimated myself last time and there is only going to be 3 parts for this week. Phew, I’m glad that’s over… so many books!!