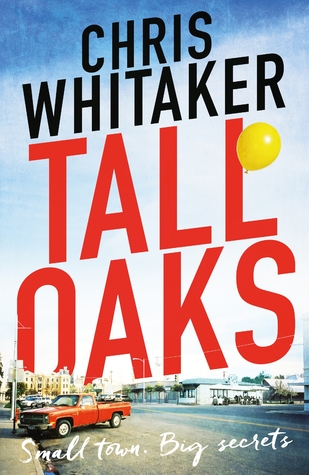 Everyone has a secret in Tall Oaks . . .

When three-year-old Harry goes missing, the whole of America turns its attention to one small town. Everyone is eager to help. Everyone is a suspect.

Desperate mother Jess, whose grief is driving her to extreme measures.

Newcomer Jared, with an easy charm and a string of broken hearts in his wake.

Photographer Jerry, who’s determined to break away from his controlling mother once and for all.

And, investigating them all, a police chief with a hidden obsession of his own . . .

This is a book that had been on my shelves for ages, and for some reason, I kept pushing it further and further down my TBR pile. Finally, I picked it up and I’m so glad that I did! This was the perfect holiday read for me!

I got through this book in less than 24 hours purely because there was so much going on in the story. The story sped along, and the way the chapters were set out to focus on a different character each time made for an entertaining and continuously moving read. There was a set story for each character that played out alongside the mystery of Harry’s disappearance which made for something new with each turn of the page. This novel was filled to the brim with thing going on, but it never felt overcrowded or confusing, it was entertaining and fluent all the way through!

While the story for this novel was not a particularly unique storyline it was still interesting due to the different stories for each character! Unfortunately, I had sussed the “who” for Harry’s kidnapping, but not the “why” from quite early on in the novel, so that was a small let-down.

This was Whitaker’s debut novel, and my gosh can this man write his characters! There was such an incredible and diverse selection of characters in this novel. These were some of the most interesting people I’ve read about in a long time! They’ll make you laugh and they’ll make you cry. Not one of their journeys through the book bored me, which is quite a feat considering there is a reasonably large number of them! It’s worth noting that is definitely a character-driven novel, so if you’re someone who prefers plot-driven books, this definitely won’t be for you!

Although this book was laugh out loud funny at moments, it was also really dark and touched on some very serious topics. There were certain moments where I found the book quite depressing but weirdly that only added to my enjoyment of the book. How it could be hilarious one minute and completely sobering the next.

Overall a really great read and the perfect book for lounging around the pool! I totally recommend this novel for any mystery junkies out there. This is slow on the thriller uptake, but busy with character development throughout.