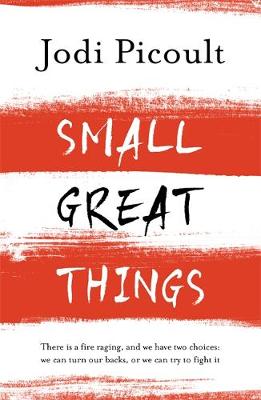 Ruth Jefferson is a labor and delivery nurse at a Connecticut hospital with more than twenty years’ experience. During her shift, Ruth begins a routine checkup on a newborn, only to be told a few minutes later that she’s been reassigned to another patient. The parents are white supremacists and don’t want Ruth, who is African American, to touch their child. The hospital complies with their request, but the next day, the baby goes into cardiac distress while Ruth is alone in the nursery. Does she obey orders or does she intervene?

Ruth hesitates before performing CPR and, as a result, is charged with a serious crime. Kennedy McQuarrie, a white public defender, takes her case but gives unexpected advice: Kennedy insists that mentioning race in the courtroom is not a winning strategy. Conflicted by Kennedy’s counsel, Ruth tries to keep life as normal as possible for her family—especially her teenage son—as the case becomes a media sensation. As the trial moves forward, Ruth and Kennedy must gain each other’s trust, and come to see that what they’ve been taught their whole lives about others—and themselves—might be wrong.

I read this book (a while back now!) as part of a readalong with lots of bookish friends on Instagram! It was called it #TheSmallGreatReadalong… see what we did there! Anyway, this review is coming so late compared to when I actually finished, but at least it’s here now!

My overall opinion on this one is that I liked it, but mainly because it was such a good discussion book, not because of the actual story. Now, that may sound controversial, that I didn’t enjoy the bulk of a book all about racism, but that’s not what I mean. Let me explain…

I think this book did an amazing job at opening up the topic of racism to the reader. As a white woman, living in a pretty middle class existence, I know for a fact that I have unfair privileges and I will never fully understand the complexities of racism, as much as I try to educate myself. This novel certainly has opened my eyes to the some of the more subtle aspects of racism that I hadn’t even thought about before. While there were the obvious racist themes in this novel, it wasn’t those that shocked me the most, it was the parts that you don’t often think about when you think of racism. So for that, for opening my eyes and my mind, I applaud Picoult for writing such a difficult and controversial book.

However, I think the teachings of this book could have been done in a more compelling story. At the end of the day, there was nothing inherently wrong with the plot, but I didn’t quite connect with it. I found a lot of it unexciting and the “twist” at the end, that Picoult just has to add into each one of her books, was so blatantly obvious it didn’t surprise me at all and kind of made the rest of the book feel a bit cheap?

Picoult’s writing isn’t my favourite, it doesn’t suck me in as much as other authors, but its still weaves a pretty interesting story. I think the characters in this book were far stronger than the plot.

My favourite part of this novel was watching Ruth and Kennedy’s relationship grow. I loved seeing how Kennedy steadily grew to understand Ruth’s frustrations and her plight to bring race to the forefront of people’s minds.

Overall, I did enjoy this book, mainly because of what it taught me and how it’s made me see things in a different way. But, it’s not the most exciting story I’ve ever read and I’m not big on the writing style.