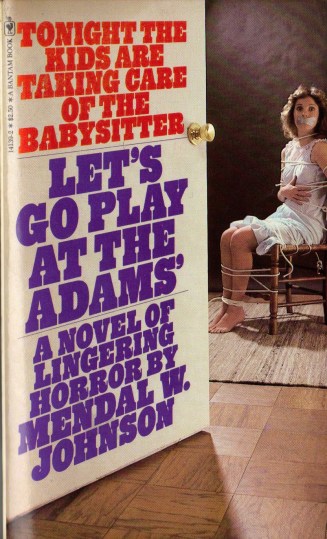 Warning, this review is kind-of spoilery.

I’m not even sure where to start with this review… what a disturbing, strange, and violent novel.

I had so many different thoughts running through my head with this novel, that I actually had to start myself a little review notebook where I could put all my thoughts on paper. This is going to be a long review… I can already feel it.

I should start by saying, this book turned out to be nothing like I thought it would be, but that hasn’t let me down. This is a very uncomfortable 4 star read. Where American Psycho was 5 stars because I enjoyed the reading experience and Patrick Bateman’s deranged, dorky character (in the least sadistic way possible), this is the complete opposite. This was an unenjoyable 4 stars because it was just so dark and disturbing… am I making sense?

What struck me about this novel at the beginning was that I disliked our victim, Barbara. She awoke gagged and tied up, and was merely annoyed, if not amused by the children’s “game”. Even later, when she realised that she really was a prisoner, she was snooty and still thought herself better than the children. Obviously, as the torture progressed and got worse, my opinion of her did change, as she changed too.

While this book sounds like it’s going to be a quick, dark story about the kidnapping and torture of a babysitter, it’s actually a lot slower than that and there isn’t a huge amount of the torture in front of our eyes. It goes on behind closed doors and is only hinted towards – this doesn’t make it any less skin crawling, however! This novel is largely focused on the characters and their thoughts throughout the week-long crime.

A lot of people’s reviews mentioned how the characters in this weren’t believable, but I think otherwise. Yes, maybe the idea that 5 kids all come together and mutually agree to kidnap and torture an adult is a little strange, but as individual people, I think it’s easy to assume they all really exist.

The eldest of the group is Dianne, at the age of 17, and I personally think she was the least likable but also least believe character. Her involvement in the kidnapping went no further than “just because” – she was in charge of all the children simply because she was the oldest and she let them do whatever they wanted. She had no motive to want to hurt Barbara, she was simply cruel for cruelty’s sake.

Secondly, there’s John, aged 16, and his involvement in the kidnapping went a lot further and was a lot more controversial. He had a motive, and that was simply lust. A sexually frustrated teenager is definitely easy to imagine and while only a teeny tiny amount go on to commit sex crimes, it’s totally plausible.

Afterwards comes Paul, aged 12, whose presence in the story is very strange. He’s not really got any motive other than his own dark desires. A weirdo 12 year old with violent tendencies is really nothing new – Paul was just a little more over the top!

Next is Bobby, aged 10, the only kid of the bunch who shows any remorse at what they’ve done. I personally feel that Bobby was the subject of peer-pressure. He thought kidnapping an adult would be fun, and as a young child, couldn’t comprehend the consequences of his actions. Other reviewers didn’t feel sorry for Bobby, but in a way, I did.

Lastly is Cindy, the youngest of the group at 9 years old. Cindy doesn’t feature in the novel an awful lot, but when she does she’s simply a bored young girl who doesn’t fully understand the reality of what’s happening. Even at the end, when things are getting more and more violent, Cindy doesn’t care. She’s just going along with the rest of her friends.

As I mentioned before, there isn’t a huge amount of “on screen” torture and violence, but when it is there, it’s grotesque and nightmarish. Johnson really did know how to write horrifying descriptions. Reading bits and pieces got really dark and at times I felt pretty squeamish.

One quick thing to say about the writing is that it really would have been nice to have more paragraph breaks! When the story is so dark and heavy, you need a bit of a breather sometimes, and you didn’t get much of that with this novel.

Right, sorry this review has been a bit of a long, messy ramble! I really wasn’t sure how to go about reviewing this weird, sinister book. If you like horrible books that are going to make you feel uncomfortable, and you can get your hands on this for cheap, I think it’s worth reading – even just to be able to say you’ve read it! But it’s definitely, definitely not for everyone – not even every horror reader.

Thanks to Virginia on Goodreads for lending me her copy to read!

I’m not going to link to Amazon or Book Depository for this one because you can’t buy it anywhere for under £60.

5 Replies to “Review: Let’s Go Play at the Adams’ by Mendal Johnson”