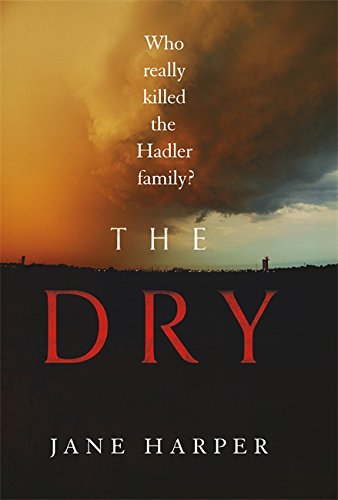 WHO REALLY KILLED THE HADLER FAMILY?

Amid the worst drought to ravage Australia in a century, it hasn’t rained in small country town Kiewarra for two years. Tensions in the community become unbearable when three members of the Hadler family are brutally murdered. Everyone thinks Luke Hadler, who committed suicide after slaughtering his wife and six-year-old son, is guilty.

Policeman Aaron Falk returns to the town of his youth for the funeral of his childhood best friend, and is unwillingly drawn into the investigation. As questions mount and suspicion spreads through the town, Falk is forced to confront the community that rejected him twenty years earlier. Because Falk and Luke Hadler shared a secret, one which Luke’s death threatens to unearth. And as Falk probes deeper into the killings, secrets from his past and why he left home bubble to the surface as he questions the truth of his friend’s crime.

I’m so disappointed that this one didn’t live up to my expectations in the end. I knew it wasn’t going to be a 5 star review from a few chapters in, it just hadn’t grabbed me enough (but it was gripping!), but I never thought I’d knock it down from 4 stars.

The plot for this one isn’t the most incredible thing ever, it didn’t blow me away when I initially read the synopsis but so many positive reviews swayed me to purchase it. It’s taken me almost a year to read this from the time I purchased it and that’s down to the fact that I still wasn’t that amazed by the synopsis. I am glad my Book and a Brew box pushed me to reading it because who knows how long it would have stayed on my shelves. Unfortunately, I don’t get the major hype.

Although the general plot didn’t grab me, I am really into the small town mystery trope and that definitely helped make me more interested in reading this. And honestly, the small town vibes in this one were really great and a big part of what I liked about this book. I love how there is so much history between all the characters and how they all have a hold over each other.

Aaron Falk, as a character, is a breath of fresh air. Ignoring my disappointment with the plot, Falk’s character alone is drawing me to read the second book in his series. It’s great to be introduced to such a level headed character! He wasn’t flaky or neurotic. He was damaged but not enough to make it the main focal point of his character. Also, he was nice! How long has it been since I’ve read about a genuinely lovely character? Too long! Falk was never bitchy or jealous or moany. He was completely pleasant through and through.

In terms of the plot, I really liked how fast paced this one was and how the mystery unfolded slowly but surely. I don’t like books that give up all its secrets at once, unless there are hints or scapegoats throughout the novel to entice you. The Dry gave you just enough plot development each chapter to keep you wanting more, and that’s why I was always so desperate to read this book during my lunch breaks and when I got home.

Unfortunately, the resolution of the question “who really killed the Hadler family?” let me down. It didn’t feel right to me. (spoiler) Considering the book was about small town values and morals, the fact the murder didn’t relate to the small town people felt like a cop out. I guess maybe Harper did that to steer the book in a different direction so she could make her second book non-relatable to Kiewarra but it didn’t seem like the right ending to me.

Overall, I enjoyed the novel apart from the ending, so really, this wasn’t so bad. It was never going to be a 5 star for me, it just didn’t connect with me on that level, but I was hoping to at least give it 4 stars. If I had just judged this one on the writing and the characters it would have been, but unfortunately, it didn’t end up that way. Never mind, on to the next read!

5 Replies to “Review: The Dry by Jane Harper”