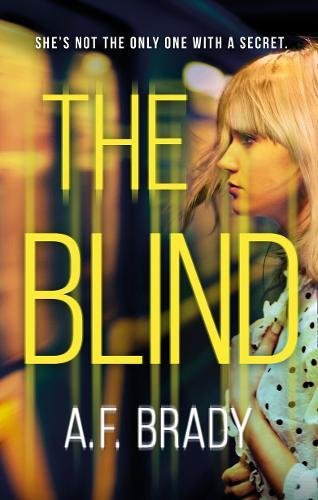 Every morning, psychiatrist Sam James gets up at six forty-five. She has a shower, drinks a cup of coffee, then puts on her make-up.

She ignores the empty bottles piling up by her door.

On this particular morning, Sam is informed of a new patient’s arrival at Manhattan’s most notorious institution. Reputed to be deranged and dangerous, Richard is just the kind of impossible case Sam has built her reputation on. She is certain that she is the right doctor to treat such a difficult patient.

But then Sam meets Richard. And Richard seems totally sane.

I’ve had The Blind in my eyeline for quite some time now (no pun intended), but if it hadn’t been for the fact that I was sprung on a blog tour with only a few days notice, I probably wouldn’t have gotten around to this one so quickly. Although I’ve been looking forward to it, I kept seeing bad or average reviews from Goodreads friends and that obviously made me worried to read a book I had so been looking forward to. It turns out I had nothing to worry about!

This book wasn’t exactly what I was expecting it to be, and yes, I’ve said this for every goddamn book I’ve been reviewing lately, but that’s just the way my book choices are going lately. If this book was marketed with the words “alcoholic,” “sex”, “demons” etc, on the back, I definitely wouldn’t have picked it up, but the book is sly enough to avoid using those descriptions and so I did. I expected this one to be much more of a fast-paced psychological thriller, but in fact it was reasonably slow and not really anything like a thriller.

This book is a very deep and brutal look into Sam’s confused and exhausting life. It tackles lots of delicate topics, so at times can be quite disturbing and difficult to read. I know lots of readers read to get away from reality but I’m not one of those sorts of readers and can happily enjoy a book that tackles the harsh reality of some peoples upsetting lives. Which this one does. It’s not a light read by any stretch of the imagination. It’s definitely should come with a trigger warning.

Personally, I thought the writing was done well, even though I know other reviewers have had issues with it’s simplicity in places. Knowing what I know about this book now, the way it’s written works so well for the plot. One minute it’s simple, it’s says what it is with no dilly-dallying, but next thing you know you’re in the most vivid and trippy of descriptions. So much is going on, it can be hard t wrap your head around it.

Characters in this novel are fantastically done. Sam is a character I would never normally read about, but I thought she, and the way she was written about, was fantastic. Considering the characters in books I normally read are deceiving husbands, hysterical women or angsty policeman, this arrogant, head-strong, selfish woman was a breath of fresh air.

This is a story of growth and healing, in my eyes. It’s about learning how to cope and coming the terms with the truth. It’s far from the thriller I imagined it was going to be but it was a terrific and different read. I would definitely recommend this to any readers who are into dark literary fiction.

Thank you HQ for sending me an ARC in exchange for an honest review.

Check out the other stops on the tour here!