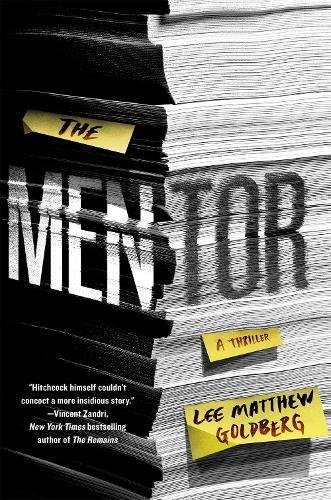 The Mentor is a twisty, nail-biting thriller that explores how the love of words can lead to a deadly obsession with the fate of all those connected and hanging in the balance.

Oh, I’m so sad I can only give this book a 3 star review. I really wanted to love this one! The synopsis sounds so dark, intense and creepy, but it let me down in that department… almost completely!

The first 40% of this book was definitely enthralling, at times silly and over the top, but still exciting to read. The characters were interesting, the story was moving along nicely and the writing was simple, but not bad. It was about when I got to 50% that I realised I was getting a little bit bored by this novel.

Characters in this one weren’t so bad. They were well developed and even though there were a fair few number of them, we did get to know them individually, quite well. My problem was that they were pretty unbelievable and I didn’t really like any of them. I’m not sure if Kyle was meant to come across as an anti-hero, but that’s kind of what he felt like… although for me, it was mostly anti, less hero. I really didn’t like the introduction to the character as being a semi-graphic description of the sex he had with his girlfriend.

The plot for this book sounded amazing! An English professor writes a depraved book that sounds like an unsolved murder case from years ago? Is it just a coincidence or is it something more sinister? Doesn’t that sounds amazing? Well, it isn’t, I hate to say! Yes, this professor does write a depraved, and terribly written, book about kidnapping a girl but it doesn’t allude to the fact it might be about a cold case until around the 60% mark, which is ridiculous!

At 336 pages, this isn’t a long novel, but it definitely could have been cut down! Most of this novel was a very repetitive back and forth between Kyle and his mad professor. Repetition like this in books is something I absolutely despise and with each new chapter, I could feel myself losing the will to read this book.

That was my first issue with the writing, and then my annoyance moved on to the number of spelling, grammatical and sentence structure errors. Considering this novel was about an editor, you would have thought the real editor would have caught the vast number of cock ups in this book! (Pic coming up, I guess it’s a tiny spoiler, but it’s not really relevant)

I got very irritated by this novel towards the end. The story was convoluted, silly and unrealistic. I got to the point of skimming pages in the ending chapters, yes, it was that disappointing. Not to mention this wasn’t creepy or tense at all. It was pretty predictable all the way through and the ending was a cheap way out.

Overall, I wouldn’t recommend this novel. It gets 3 stars because I did enjoy the first 40% or so, but the story became silly and I couldn’t get over the number of errors in the writing.

12 Replies to “Review: The Mentor by Lee Matthew Goldberg”