So the wonderful people behind Top Ten Tuesday are taking a 7 WEEK BREAK and I’m like “um, what do I do on Tuesday’s now????” So I’ve just decided to go back through some of their old topics and keep my TTT posts going each week until they’re back with new stuff!

So, for the first catch-up post I’m going to talk about my most intimidating books!

(My thought are in the non italic text)

Synopsis: In what is arguably his greatest book, America’s most heroically ambitious writer follows the short, blighted career of Gary Gilmore, an intractably violent product of America’s prisons who became notorious for two reasons: first, for robbing two men in 1976, then killing them in cold blood; and, second, after being tried and convicted, for insisting on dying for his crime. To do so, he had to fight a system that seemed paradoxically intent on keeping him alive long after it had sentenced him to death. Norman Mailer tells Gilmore’s story–and those of the men and women caught up in his procession toward the firing squad–with implacable authority, steely compassion, and a restraint that evokes the parched landscapes and stern theology of Gilmore’s Utah.

This is a world renowned book and I loooove true crime, as you probably already know, but, this book is over 1000 pages! I feel like, as a blogger, I don’t get the time to read huge books like this as I’m expected to get reviews out. I would love to read this one, but even if I wasn’t a blogger, 1000 pages is a lot of pages!

Synopsis: This is the way the world ends: with a nanosecond of computer error in a Defense Department laboratory and a million casual contacts that form the links in a chain letter of death.

And here is the bleak new world of the day after: a world stripped of its institutions and emptied of 99 percent of its people. A world in which a handful of panicky survivors choose sides or are chosen. A world in which good rides on the frail shoulders of the 108-year-old Mother Abigail and the worst nightmares of evil are embodied in a man with a lethal smile and unspeakable powers: Randall Flagg, the dark man.

This is one of my mums favourite books, she’s read it about 5 times. Again, though, this is a monster of a book at over 1100 pages! This is intimidating not only because it’s hug but also because I’m scared I won’t like it and mum will think I’m mad!

Synopsis: Johnny Truant wild and troubled sometime employee in a LA tattoo parlour, finds a notebook kept by Zampano, a reclusive old man found dead in a cluttered apartment. Herein is the heavily annotated story of the Navidson Report.

Will Navidson, a photojournalist, and his family move into a new house. What happens next is recorded on videotapes and in interviews. Now the Navidsons are household names. Zampano, writing on loose sheets, stained napkins, crammed notebooks, has compiled what must be the definitive work on the events on Ash Tree Lane.

But Johnny Truant has never heard of the Navidson Record. Nor has anyone else he knows. And the more he reads about Will Navidson’s house, the more frightened he becomes. Paranoia besets him. The worst part is that he can’t just dismiss the notebook as the ramblings of a crazy old man. He’s starting to notice things changing around him…

I’m really excited to read this one, I’ve even bought it already, it’s just a case of prepping myself. It’s a big book, around 700 pages, but it’s also set out in a unique and peculiar way that’s going to make the reading experience different to normal. I hope I like this one, I’ve been wanting to read it for years & years!

Synopsis: Obsessed with the secret of creation, Swiss scientist Dr. Victor Frankenstein cobbles together a body he’s determined to bring to life. And one fateful night, he does. When the creature opens his eyes, the doctor is repulsed: his vision of perfection is, in fact, a hideous monster. Dr. Frankenstein abandons his creation, but the monster won’t be ignored, setting in motion a chain of violence and terror that shadows Victor to his death.

This one is a short book, so it isn’t intimidating because of that, it’s more because it’s such a highly appreciated novel. This is so well loved and I’m afraid I’m just not going to “get” it. I don’t expect it to be scary, honestly, but I expect it to be amazing.

Synopsis: In this nightmare vision of a not-too-distant future, fifteen-year-old Alex and his three friends rob, rape, torture and murder – for fun. Alex is jailed for his vicious crimes and the State undertakes to reform him – but how and at what cost?

This is another book I’m scared I won’t “get”. I mean, it’s a book full of its own language, and I’ve lost my copy with the glossary at the back! How am I gonna understand any of this?

Synopsis: Just before dawn one winter’s morning, a hijacked aeroplane blows apart high above the English Channel and two figures tumble, clutched in an embrace, towards the sea: Gibreel Farishta, India’s legendary movie star, and Saladin Chamcha, the man of a thousand voices.

Washed up, alive, on an English beach, their survival is a miracle. But there is a price to pay. Gibreel and Saladin have been chosen as opponents in the eternal wrestling match between Good and Evil. But chosen by whom? And which is which? And what will be the outcome of their final confrontation?

I want to read this novel, but I fear, like my mum, I won’t get what all the controversy was about because I won’t fully understand all the parts about Islam. I have bought this one, because I love the cover, but who knows when I will read it.

Synopsis: When Jonathan Harker visits Transylvania to help Count Dracula with the purchase of a London house, he makes horrifying discoveries about his client and his castle. Soon afterwards, a number of disturbing incidents unfold in England: an unmanned ship is wrecked at Whitby; strange puncture marks appear on a young woman’s neck; and the inmate of a lunatic asylum raves about the imminent arrival of his ‘Master’. In the ensuing battle of wits between the sinister Count Dracula and a determined group of adversaries, Bram Stoker created a masterpiece of the horror genre, probing deeply into questions of human identity and sanity, and illuminating dark corners of Victorian sexuality and desire.

This is another one of those classics I’m worried I won’t love like everyone else. I’m really not a classics reader but I want to be, especially when it comes to old horror like this! This is an average sized book but I’m just expecting so much from it.

Synopsis: Welcome to Derry, Maine. It’s a small city, a place as hauntingly familiar as your own hometown. Only in Derry the haunting is real.

They were seven teenagers when they first stumbled upon the horror. Now they are grown-up men and women who have gone out into the big world to gain success and happiness. But the promise they made twenty-eight years ago calls them reunite in the same place where, as teenagers, they battled an evil creature that preyed on the city’s children. Now, children are being murdered again and their repressed memories of that terrifying summer return as they prepare to once again battle the monster lurking in Derry’s sewers.

My copy of this book has 1250 pages!!! That’s a lot of pages!!! I don’t want to read this book and end up hating it, because one) what a waste of time and two) how could I possibly hate a King book?

Synopsis: Set in the rich farmland of California’s Salinas Valley, this sprawling and often brutal novel follows the intertwined destinies of two families—the Trasks and the Hamiltons—whose generations helplessly reenact the fall of Adam and Eve and the poisonous rivalry of Cain and Abel. East of Eden is an epic tale of good vs. evil with many biblical references and parallels. The story is ultimately that of good’s triumph over evil and the human will’s ability to make that happen.

I know very little about Bible stories and Christianity in general so I’m afraid most of this book is just going to go straight over my head. It’s a 700+ page book too, I don’t want to read that much if I don’t get any of it! 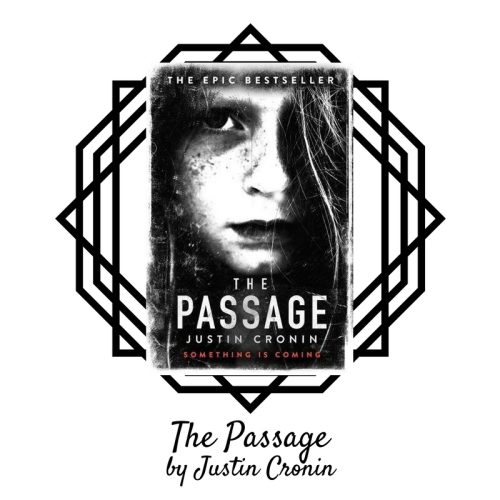 Synopsis: First, the unthinkable: a security breach at a secret U.S. government facility unleashes the monstrous product of a chilling military experiment. Then, the unspeakable: a night of chaos and carnage gives way to sunrise on a nation, and ultimately a world, forever altered. All that remains for the stunned survivors is the long fight ahead and a future ruled by fear—of darkness, of death, of a fate far worse.

As civilization swiftly crumbles into a primal landscape of predators and prey, two people flee in search of sanctuary. FBI agent Brad Wolgast is a good man haunted by what he’s done in the line of duty. Six-year-old orphan Amy Harper Bellafonte is a refugee from the doomed scientific project that has triggered apocalypse. He is determined to protect her from the horror set loose by her captors. But for Amy, escaping the bloody fallout is only the beginning of a much longer odyssey—spanning miles and decades—towards the time and place where she must finish what should never have begun.

This is a beast of a book at almost 800 pages and I’ve seen so many good things about it, but I’ve also seen so many bad thing about it. Lots of 3 star reviews! This one isn’t so much about getting the story, it’s more about “am I really going to enjoy this?”. The amount of times I’ve seen this, half read, in charity shops worries me.

So there we have it! These are the top ten books on my tbr that I find seriously intimidating!

35 Replies to “Top Ten Tuesday is taking a break… but I’m not! The most intimidating books”