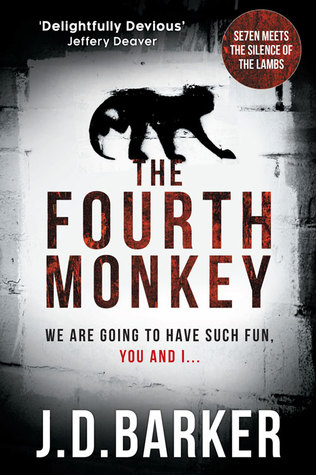 For over five years, the Four Monkey Killer has terrorized the residents of Chicago. When his body is found, the police quickly realize he was on his way to deliver one final message, one which proves he has taken another victim who may still be alive.

As the lead investigator on the 4MK task force, Detective Sam Porter knows even in death, the killer is far from finished. When he discovers a personal diary in the jacket pocket of the body, Porter finds himself caught up in the mind of a psychopath, unraveling a twisted history in hopes of finding one last girl, all while struggling with personal demons of his own.

With only a handful of clues, the elusive killer’s identity remains a mystery. Time is running out and the Four Monkey Killer taunts from beyond the grave in this masterfully written fast-paced thriller.

I had so many opinions running through my head when I was reading this. At first I was excited and intrigued to find out more, then I was slightly reluctant to read it towards the middle (though I think factors outside of the book were influencing my opinion at that point) and then by the end I was super eager to finish it (in a good way) and see where it went.

This is a fast paced thriller that’s going to keep you rooted to your seat. I, unfortunately, had so much to do while reading this book (work and personal life) that I wasn’t able to sit and read huge chunks of it and I think that’s why I got a little slow to reading it towards the middle. If you’re going to read this book, my advice is to free up some of your time so you can bulk read it, otherwise some of the more shocking revelations and continuous fast paced action won’t have it’s desired effect.

The first thing I loved about this novel is the fact that our protagonist is an older man, not some sprightly new thing coming straight out of police school. It was nice to have that less popular character as our “hero”. The second thing I loved was the Diary entries. I (mainly) love books that jump back and forth between past and present so when these skin crawlingly creepy diary entries started, I was pumped! They never let me down, through the entire thing they were disturbing and really added something to the novel.

My only complaint? Well, this was a buddy read with my pal Annie @ The Misstery, and we knew who 4MK was the moment we met them. Kind of a bummer but at the same time it was quite fun to see if we were actually going to be right or not (we were). It was still good fun to find out how everything came together in the end.

Overall, I really enjoyed this novel and I’m already excited to see another book in the series will be out next year. The ending lines of the novel are chilling and I can’t wait for them to be followed up!

Thanks to HQ for sending me a copy of the book in exchange for an honest review!

HarperCollins & HQ are offering 3 lucky readers the chance to win a hardback copy of The Fourth Monkey by J. D. Barker. The giveaway is running from today to the 11th July.

Please note: this giveaway is for UK entrants only.

To enter for the chance to win…

There it was again, that incessant ping.

I turned the ringer off.

Sam Porter rolled to his right, his hand blindly groping for the phone on the nightstand.

His alarm clock crashed to the floor with a thunk unique to cheap electronics from China.

When his fingers found the phone, he wrestled the device from the charging cable and brought it to his face, squinting at the small, bright screen.

A text from Nash.

Porter looked over at his wife’s side of the bed, empty except for a note —

Went to get milk, be back soon. xoxo, Heather

He grunted and again glanced at his phone.

So much for a quiet morning.

Porter sat up and dialed his partner. He answered on the second ring.

The other man fell silent for a moment. “I’m sorry, Porter. I debated whether or not to contact you. Must have dialed your number a dozen times and couldn’t bring myself to actually place the call. I finally decided it would be best just to text you. Give you a chance to ignore me, you know?”

Another pause. “You’ll want to see for yourself.”

“There’s been an accident.”

Porter rubbed his temple. “An accident? We’re Homicide. Why would we respond to an accident?”

“You’ve gotta trust me on this. You’ll want to see it,” Nash told him again. There was an edge to his voice.

“Near Hyde Park, off Fifty-Fifth. I just texted you the address.”

His phone pinged loudly in his ear, and he jerked it away from his head.

He looked down at the screen, noted the address, and went back to the call.

“I can be there in about thirty minutes. Will that work?”

Porter disconnected the call and eased his legs off the side of the bed, listening to the various pops and creaks his tired fifty-two-year-old body made in protest.

The sun had begun its ascent, and light peeked in from between the closed blinds of the bedroom window. Funny how quiet and gloomy the apartment felt without Heather around.

Went to get milk.

From the hardwood floor his alarm clock blinked up at him with a cracked face displaying characters no longer resembling numbers.

Today was going to be one of those days.

There had been a lot of those days lately.

Porter emerged from the apartment ten minutes later dressed in his Sunday best — a rumpled navy suit he’d bought off the rack at Men’s Wearhouse nearly a decade earlier — and made his way down the four flights of stairs to the cramped lobby of his building. He stopped at the mailboxes, pulled out his cell phone, and punched in his wife’s phone number.

You’ve reached the phone of Heather Porter. Since this is voice mail, I most likely saw your name on caller ID and decided I most certainly did not wish to speak to you. If you’re willing to pay tribute in the form of chocolate cake or other assorted offerings of dietary delight, text me the details and I’ll reconsider your position in my social roster and possibly get back to you later. If you’re a salesperson trying to get me to switch carriers, you might as well hang up now. AT&T owns me for at least another year. All others, please leave a message. Keep in mind my loving husband is a cop with anger issues, and he carries a large gun.

Porter smiled. Her voice always made him smile. “Hey, Button. It’s just me. Nash called. There’s something going on near Hyde Park; I’m meeting him down there. I’ll give you a call later when I know what time I’ll be home.” He added, “Oh, and I think there’s something wrong with our alarm clock.”

He dropped the phone into his pocket and pushed through the door, the brisk Chicago air reminding him that fall was preparing to step aside for winter.

Check out the other blog tour stops!