Hey all! Back here again with the latest Top Ten Tuesday post! This week’s theme was based around Father’s Day.

So, this week we have another special guest, my dad! This post is the same kind of thing as I did before. Dad has come up with 8 books that are his most memorable reads.

This is a pic of me and him on holiday last year at a beautiful villa in Majorca!

So, without further ado, let’s get onto finding out about some of my dad’s favourite books, in no particular order. 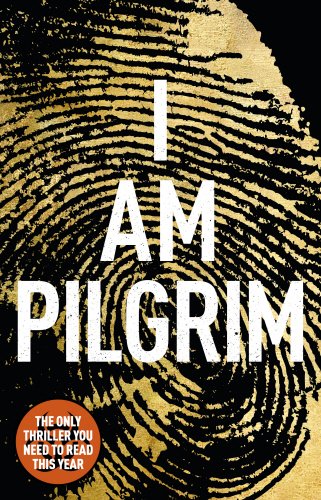 I Am Pilgrim by Terry Hayes

Dad’s thoughts: I genuinely could not put this book down from the moment I began reading it. If you like fast paced, pulsating thrillers then this one is definitely for you.

A brilliant debut novel by Terry Hayes who I believe was once a movie screenwriter credited with writing Mad Max 2 and Beyond the Thunderdome (A far cry from this novel I hasten to add).

It is quite an epic read but there are so many twists and turns it kept me gripped from start to finish. I read a lot of police procedural and counter terrorism/espionage thrillers and this book has both, in spades. It starts with a dead woman found face down in a bath of acid with her features erased, her teeth missing and her fingerprints gone. The investigator in charge of the murder case tracks down the man who wrote the definitive textbook on forensic investigations under the pseudonym ‘Pilgrim’ (the retired head of a secret US Intelligence espionage unit) who he convinces to help on the case.

Suffice to say that it is no ordinary murder case and Pilgrim finds himself embroiled in the hunt for a faceless madman who is preparing to unleash bacterial warfare on the US. The story meanders from a public beheading in Mecca to deserted ruins on the Turkish coast via a Nazi death camp in Alsace and across the Hindu Kush and through the US.

I had no idea where it was leading me or where it would end, but when I found out I was not disappointed. Definitely the best book of it’s kind that I have read in a very long time.

Dad’s thoughts: This was recommended to me many years ago. It is a fantasy adventure about a secret enchanted world woven in to the fabric of a carpet which contains the last little bits of magic that humankind can still access. Dark forces are trying to destroy it but good forces are battling to preserve it. Not my normal type of book if I’m honest (not much of a fantasy fiction fan) but I have to admit it was a welcome escape from the humdrum reality of life and I thoroughly enjoyed every word.

Superbly written and for me a very welcome journey into imagination and storytelling with everything from Love and hope to the horrors of battle and titanic struggles between good and evil.

If you think the Harry Potter novels are imaginative you need to read this book. 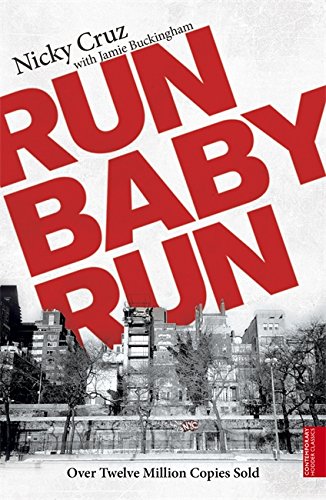 Dad’s thoughts: I read this as part of my English Literature curriculum as a 13 year old… all those years ago.

The testimony of Nicky Cruz a young Puerto Rican kid growing up on the streets of New York. As a young boy Cruz is ‘initiated’ in to the Mau Mau’s, one of NY’s toughest street gangs of the time. He is a ‘bit of a geezer’ and quickly rises through the ranks to become the President of the gang, but while he is all ‘Big Bad Gangsta’ on the outside Nicky is fighting an internal battle with fear and regret as he witnesses things we don’t even dare dream about on an almost daily basis. That is until an encounter with a preacher, David Wilkerson. Over time Nicky finds Christ and battles his way out of the life he has into a completely new one and goes on to use his experiences to try to help others trapped in the same vicious circle he was.

Reading about the things that Nicky (who was younger than I was when I was reading the book at the time of his indoctrination in to the gang) faced and saw every day of his young life both intrigued and terrified me. Fortunately for me the intrigue was outweighed by the terror, but looking at some of my classmates from back then I can’t say the same was true for all of us!!

When the Lion Feeds by Wilbur Smith

Dad’s thoughts: First of the Courtney novels by Wilbur Smith. I devoured this as a 15-year-old boy. Set in South Africa in the late 1800’s it tells the story of two brothers. Sean who yearns to be the tough farming/fighting man like his dad and Garrick happy to live in the shadows. Believing Sean to be dead Garrick returns to the homestead where Anna, Sean’s girlfriend, tells Garrick she is pregnant and Garrick steps up to marry her and give the child a father. Obviously it all goes a bit pear-shaped when Sean returns from the war (while Garrick and Anna are on Honeymoon!). Anna makes a shocking accusation that sets the brothers against each other, Sean leaves and Garrick turns to drink.

The book then follows Sean as he makes and loses a fortune during the gold rush while revelling in the hard-drinking, hard fighting life of a prospector. When he loses a fortune in a trap set up by his big rival he is on the move again, this time back into the wilderness where he makes a fortune again through hunting. He falls in love and his life changes again….. until tragedy befalls him once more and he heads back out into the bush.

A bit clichéd I know, but this book had it all for a teenage boy, Big game hunting (not PC now I know but not such an issue for me in 1982), War, drinking, fighting, gambling, intrigue, betrayal, beautiful women and love both of the unrequited and passionate, requited kind. 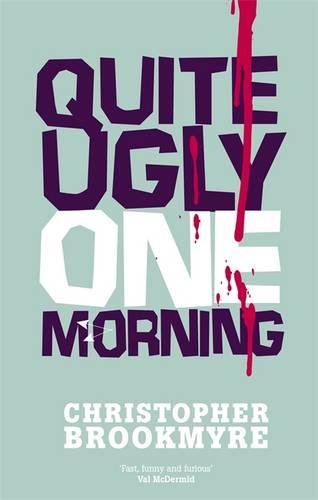 Quite Ugly One Morning by Christopher Brookmyre

This book is set in Edinburgh and finds investigative journalist Jack Parlabane looking into the brutal murder of a gambling debt ridden Dr Jeremey Ponsonby whose body is discovered by the postman, tied to the bed with his throat cut and his nose and index fingers missing. The room is trashed and covered in urine and excrement, to which the postman unwillingly adds the contents of his stomach.

Parlabane, with the help of an ambitious DC Jenny Dalziel delves deeper into the murky world that surrounds the now dead Dr Ponsonby and gets involved with such characters as the Drs Ex Wife, the aptly named Dr Sarah Slaughter, crooked hospital trust administrator Stephen Lime and hapless Essex hit-man Darren Mortlake who through-out the book manages to lose a finger, slice his own face open, have one of his hands cut off by a passing train and the other blown off by a shotgun

As with all Brookmyre’s books (the one’s I have read at least) this is a really clever, really funny, really fast paced well written book which is full of the unexpected and can go from making you squirm uncomfortably to embarrassing yourself by laughing out loud on a packed commuter train on the way to work in the morning at the drop of a hat.

This is a pacey, entertaining, hilariously funny book and the one that launched Christopher Brookmyre’s career (the last couple of books I bought of his had him credited as Chris Brookmyre… Why, I don’t know!) 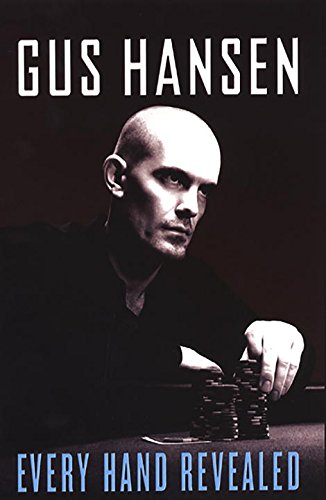 Every Hand Revealed by Gus Hansen

Dad’s thoughts: OK, unless you are a fan of Texas Hold‘Em it is highly unlikely you would have heard of Gus Hansen and it is highly unlikely you would have been tempted to pick this book up. But a decade or so ago I got into the game and would sit up until the silly hours watching the big games on late night TV. I was fascinated by the larger than life characters who played the game and seemed, at times, to be able to read the minds of their opponents. One such player was Gus Hansen, a Danish born professional player affectionately referred to as ‘The Madman’, not because he acted up at the tables, far from it, he was one of the coolest, calmest players on the tour, but because he was so fearless and aggressive in his playing style and to a newbie like me that fearlessness when faced with a decision that could cost you (or win you) hundreds of thousands of dollars was intoxicating.  In 2007 Hansen won the Aussie Millions World Poker Tour event beating 747 players and claiming the top prize of $1.2million. Hansen took a small tape recorder with him to the tournament and would regularly leave the table to go and record the thought processes that made him make the plays he did during each and every hand. This book is a collection of the 300 or so hands in which Hansen got involved (obviously the pre-flop fold hands are left out to spare the readers sanity!) and gives us a window into the mind of a poker genius as he outwits and out strategises everyone else at the tournament to emerge victorious (a feat made no less impressive by the fact that he was not able fully concentrate on what was happening at the tables due to the need to slope off and whisper into his machine so often….. even missing a few hands in the process!).

The reason this book is on my list is that it probably saved me a small fortune, because after reading it I knew I didn’t have what it took to be a poker player so my fledgling online poker career was nipped in the bud before I lost the shirt off my back. 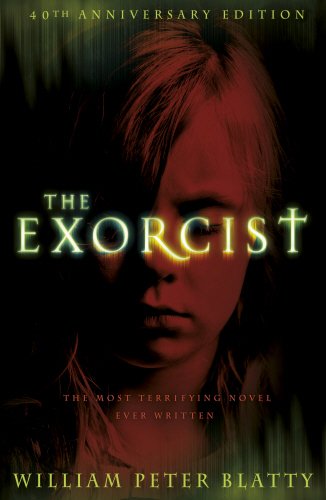 The Exorcist by William Peter Blatty

Dad’s thoughts: This book really needs no introduction, I think everyone has heard of it and knows the story, primarily through the films (either the original or the later remake). But believe me, as with most books that have been converted into films, the celluloid versions do it no justice whatsoever.

Forget Stephen King forget Dean Koontz and forget any other horror writer. William Peter Blatty’s The Exorcist is the one horror book that I will never forget reading, because it terrified me. I can still see myself sitting in the big, grey, fabric armchair in the corner of the living room at Bisterne Avenue in Walthamstow as a 17 year old ‘man’. It is 3 o’clock in the morning, everyone else in the house is asleep and I have been reading for hours (I actually read this entire book in two sittings, which is a record for me and one I haven’t even come close to since). I am literally shaking with fear, too frightened to open the living room door to go up to bed for fear of what might be lurking in the darkened hallway when I do.

I won’t profess to being an avid reader of horror novels, but there was a time in my late teens when horror was all I would read and I can honestly say that none of the other books I read stick out in my mind or have stayed with me the way The Exorcist did. 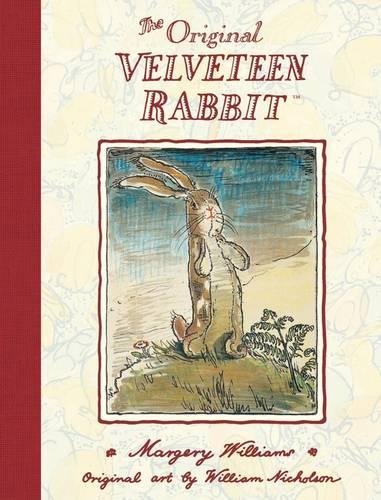 The Velveteen Rabbit by Margery Williams

Dad’s thoughts: Because this was my favourite book to read to you as a child, Zuky.

So there we have it! Those are some of the most memorable books of my dad’s lifetime.