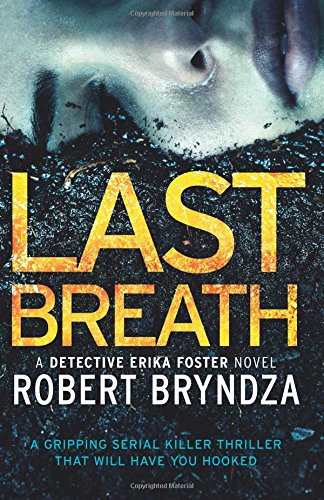 He’s your perfect date. You’re his next victim.

When the tortured body of a young woman is found in a dumpster, her eyes swollen shut and her clothes soaked with blood, Detective Erika Foster is one of the first at the crime scene. The trouble is, this time, it’s not her case.

While she fights to secure her place on the investigation team, Erika can’t help but get involved and quickly finds a link to the unsolved murder of a woman four months earlier. Dumped in a similar location, both women have identical wounds – a fatal incision to their femoral artery.

Stalking his victims online, the killer is preying on young pretty women using a fake identity. How will Erika catch a murderer who doesn’t seem to exist?

Then another girl is abducted while waiting for a date. Erika and her team must get to her before she becomes another dead victim, and, come face to face with a terrifyingly sadistic individual.

It’s taken me awhile to get round to reading this latest installment in the Erika Foster series, but here I am, having just finished it! I love all the books in this series and this one is no exception, though it hasn’t become my favourite one.

There’s no doubt about it, these books are fast paced and full of thrills the whole way through. You’ll find yourself losing yourself in the story within a couple of minutes, which is something I love about this series! However, this book did get a little cheesy romance-y at times which was a little bit cringey to read, but considering we’ve been there from the beginning of Erika and Peterson’s relationship, it’s not all that bad.

The characters, as always, are great. Lots of shocks developments with a few of them within this book too. Erika is sassy and hard headed as she always is, but I’m getting a little sick of her arrogance and need to fight with all authority. I was sad to find Moss took a bit of a back-seat in this story. She’s one of my favourite characters because she’s so real and brings a bit of humor to the book, so I would have liked to have seen more of her!

I like it when a book is mysterious and you have the ability to try and work out the who the bad guy is yourself, but you didn’t get that with this novel. From very early on, you already know who the killer is and I think that really takes away from some of the excitement that comes with police procedurals. That being said, it is still fun to see how close the killer is to being caught and how they manage to evade Erika & her team each step of the way.

The crimes in this book were brutal and dark, like the other murders we’ve seen in this series so far. Our killer was the perfect mix between dweeb and arrogant tool, so he worked perfectly as our bad guy who hated women.

I have one little bug bear in relation to a social view in the book. Considering this book is so inclusive and diverse (black & LGBTQ+ characters) I found it a little odd that when the first body is found, and they notice her lady region is shaved, the first thing mentioned is “promiscuity”. The pathologist says they can’t be hasty to judge but then says “was it a bad choice on her part? or were events thrust upon her, out of her control?” as though being shaved is synonymous with prostitution and other antisocial sexual behaviours. This outlook didn’t seem to fit with the overall tone of this series so far, but it wasn’t anything too major, just me being picky.

Overall, I liked this addition to the Erika Foster series, but it wasn’t my favourite one. It was fast paced, tense & thrilling, but I found it a little bland in comparison to book number 3. I will continue to read this series for as long as it goes on (or until I get sick of Erika being so snappy).

What's your favourite animal?⁠
Happy Sunday! ✨
Book review: A Kick in the Belly by Stella Dadzie⁠
Do you have any special system on your Goodreads for how you shelve things?⁠
#DoYouHaveThatBook challenge 🤔⁠
Recently(ish) @bookbeforeuleap posted a vertical spine stack and I wanted to join in! I thought I would have more than this, but these were all I could find at the time 😁
Book review: Come With Me by Ronald Malfi (AD-GIFTED by @titanbooks)⁠
What’s a book where you preferred the adaptation?
Happy Sunday! ✨