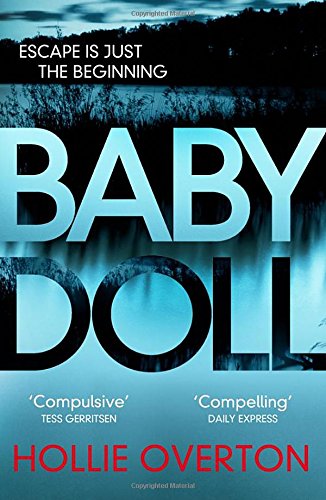 Held captive for eight years, Lily has grown from a teenager to an adult in a small basement prison. Her daughter Sky has been a captive her whole life. But one day their captor leaves the deadbolt unlocked.

This is what happens next…

…to her twin sister, to her mother, to her daughter…and to her captor.

{warning: lots of aggression and swearing coming up}

I read this book back in May 2016, but with a new release from Hollie Overton approaching, I thought I would revisit my review of Baby Doll, only to find it wasn’t already on my blog!

This has to be the worst book marketed as being “for fans of Gone Girl and Girl on the Train” because it wasn’t even a smidgen like either of those books!

I was looking forward to giving this a read, it sounded like an exciting thriller; woman escapes from her captor and now she’s trying to rebuild her life and future. But it doesn’t really start out that way… everything kind of falls into place for Lily in the first few pages and so you think, is this going to be as exciting as I first hoped? Well the answer to that is no, it’s not.

It’s all very over the top. Every single thing Abby & Lily do is grossly OTT. I mean I don’t personally know how I, or my family would react if something like this happened but it all seems very overplayed, cliche and cheesy.

That actions of individuals and some of the plot lines were ridiculous. The town seems raving mad, no wonder no one noticed a psychopath in their midst! I mean for one, this town needs to sort out it’s police force, they’re so unprofessional! Plus, is it really plausible that Lily has come out of her hell-hole for the first time in 8 years, and she settles into normal life within a couple of days? No, that girl is going to need major therapy, and likely, a hospital visit!

I don’t think Overton did a particularly good job at portraying any of the characters. They all seemed very wooden and lifeless. I found them all to be extremely childish, shallow and very selfish and so couldn’t connect with any of them. We also couldn’t attach to Lily because this book moved so ridiculously fast! I couldn’t keep up, what’s the rush? They all felt completely fake, like the things they did and said were not something you could imagine a real person doing or saying. We were supposed to empathise with Lily but it just wasn’t possible for me, she was cold and boring and I think the multiple POV’s was a bad call on Overton’s part because it meant we couldn’t spend that time getting to know the character and instead had to put up with everyone else’s junk that we didn’t care about and wasn’t relevant to the plot (cough cough the mother’s affair cough cough).

I would go so far as to say I felt this story was more about Abby than it was about Lily. Abby was the major let down for me in this book, she’s really got on my nerves. There are a number of times where she does something “for Lily” but really she’s just being selfish and doing it for herself because she can’t get a fucking grip, and I was almost to the point of ripping my hair out in frustration because of stupid it all was.

Plus, there was love triangle… I mean, what? Give me more of Rick’s POV if you must, anything to get me away from twin sisters fighting over one stupid man. Abby was so fucking annoying when it came to Wes, she was so desperately needy for him all the while putting on a stupid I-don’t-need-you front. Deal with it Abby, you love him and he loves you, just fucking deal with it.

I don’t think this was very well written either, it all seemed very rushed. Also, why was Eve called “Eve” one minute and “Mom” the next? And why couldn’t Abby call “Mr Hanson” by his actual name? We get it, he was your teacher, but you’re an adult now, with a kid and this man ruined your sister’s life, would you really be calling him “Mr Hanson” all the time. It was like I was reading the POV of a 6 year old.

I admit the twist was quite a shock and I hadn’t seen that particular ending coming, but that’s the only good I can say for this book… the half star is for this reason alone.

Overall, this was too “family drama” for me. I wanted a fast paced thriller not some sappy, emotional love story. This book was supposed to focus on the broken Lily rebuilding her life with her loving family surrounding her, but instead turned into a ridiculous love triangle story that I couldn’t care less about. In the end I skipped the last 10 pages or so, I was done with this book when I was 20% the way through… Maybe this would be a good book for people who are into “chick-lit/women’s fiction” – whatever that means, but it’s not my cup of tea.

Thanks to Netgalley and Random House UK, Cornerstone for the opportunity to read this book in exchange for an honest review.