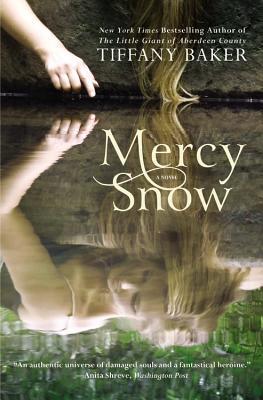 The real trick to holding two things together, June was coming to see, wasn’t how rightly they were bound but how well. Sometimes a loose thread was a saving grace.

Beautiful writing style! It’s so elegant and well formed. Easy to read yet full of vivid imagery and scenery. Every character, no matter how small, was really well formed and interesting to read about. Unfortunately, there were some really dislikable characters in this novel.

I thought I liked June, I thought she was a brave outsider doing her best to assimilate but it just turns out she’s selfish! You would have thought that a woman who knows what it feels like to be on the outside of everyone else would sympathise with the likes of Mercy and her family, but instead she does whatever she can to get rid of them, all for her own selfish needs and even after she knows how heart broken her son is. I thought maybe it had something to do with Cal, as it was obvious he was angry and controlling at times, but I still couldn’t sympathise with her because, in the end, she could have just left the Snow’s alone, rather than torment and threaten them.

Mercy, of course, was supposed to be every reader’s hero. She was the kind of person you wish you could be. She was gentle and kind, she was obedient and caring, and most of all, she was selfless. She held no grudges against anyone, even those who were plotting against her, all she wanted to do was help people prove her brother’s innocence, and that her family weren’t the ne’er-do-wells everyone believed them to be.

Although Mercy was lovely, Hazel was by far my favourite character because she was so genuine. She wasn’t perfect, she had her doubts and silly thoughts, Hazel supposed she ought to thank her, but instead she felt a hot flush across her chest. They were her sheep, and Fergus was her man, but she tried her best to do what was right and that made her a really likable person.

Nate really grew as a character throughout the novel. To begin with, he remained a bit of a nothingy addition to the story, but he gradually became one of the nicest characters to read about. He was so warm and kind, he didn’t take after his father at all, which is clearly a good thing! He was a total cutie as well, the part with the lamb birthing almost had my heart melting! (although it was also a little too TMI when it talked about his hand in her really warm uterus… *shudder*)

Cal doesn’t even get a paragraph because of what a twat he was.

This was a lovely book, full of morals and thought-provoking subjects. What started out as a bit of a boring and weird read for me, turned into something really wonderful. I’m glad I picked this up.